COME JUMP WITH US AT EPIC AIR TODAY!

These safe soft foam balls will fly upward from the center volcano, downward from the dumping bucket, and fly across from 8 easy to use cannon blasters on the second and third levels that creates an exciting environment for kids. If for any reason you have any questions or comments about our ball blaster arena near Naperville, feel free to give us a call at 847-608-0646 or fill out the form on our contact us page and a representative will respond shortly.

Children will climb and maneuver through mazes, obstacles, swinging areas, and two huge rocket blaster slides. Our ball blaster arena near Naperville is Epic Air’s newest attraction and is the only one you will find in the Chicagoland area and surrounding suburbs. 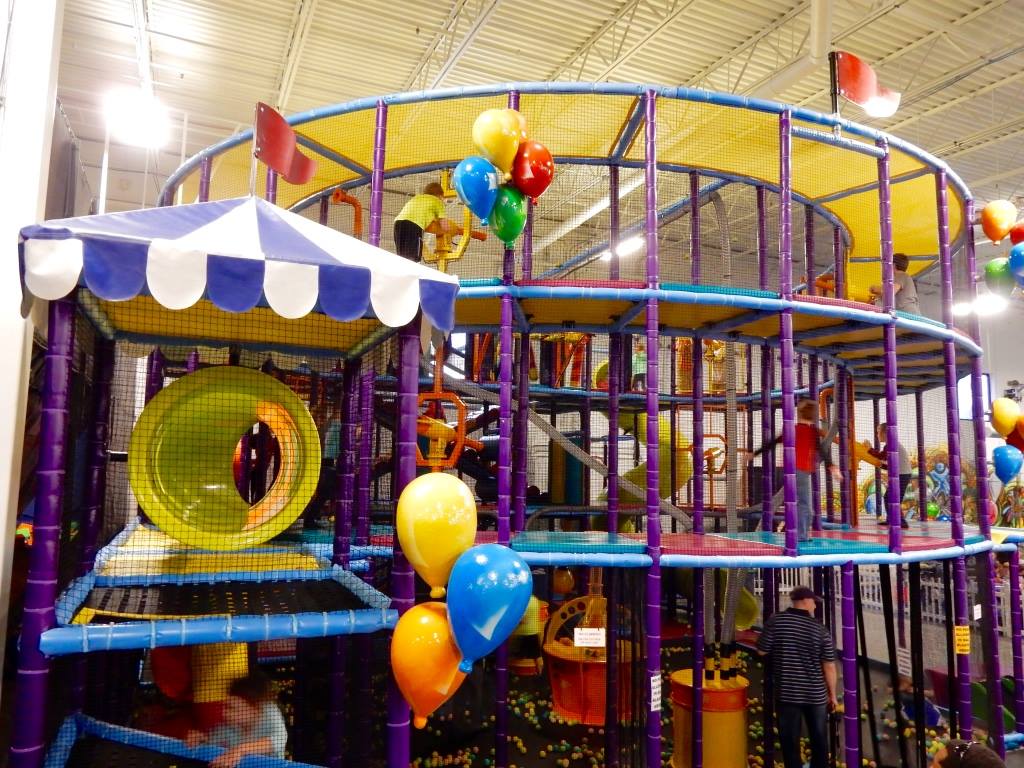 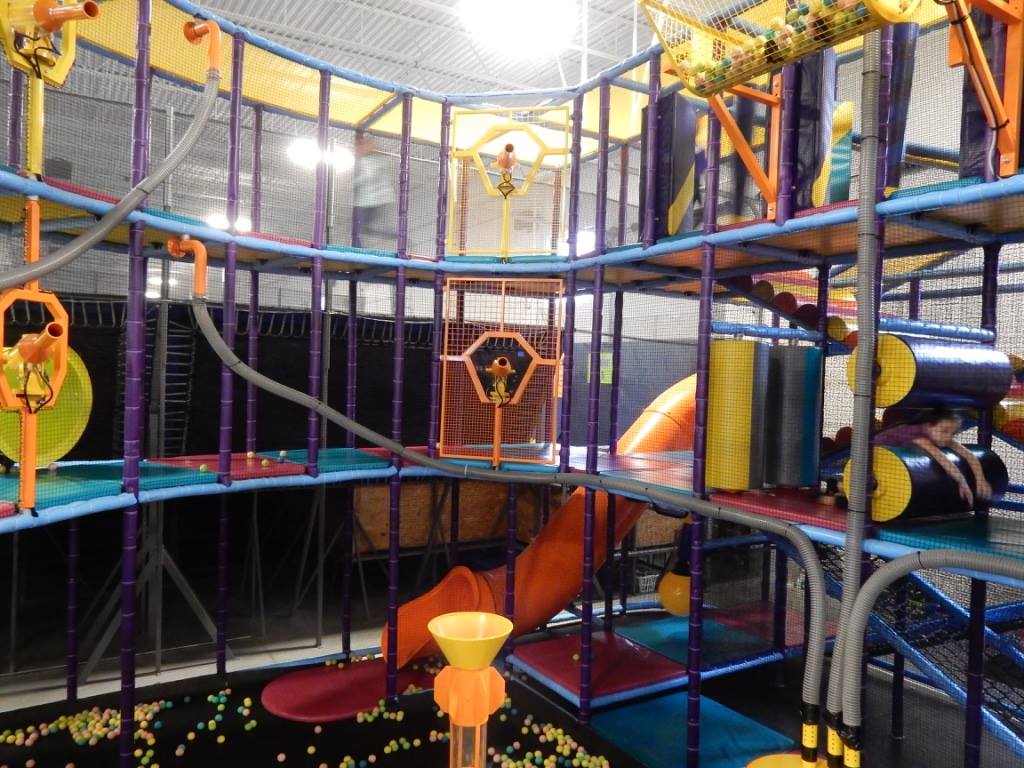 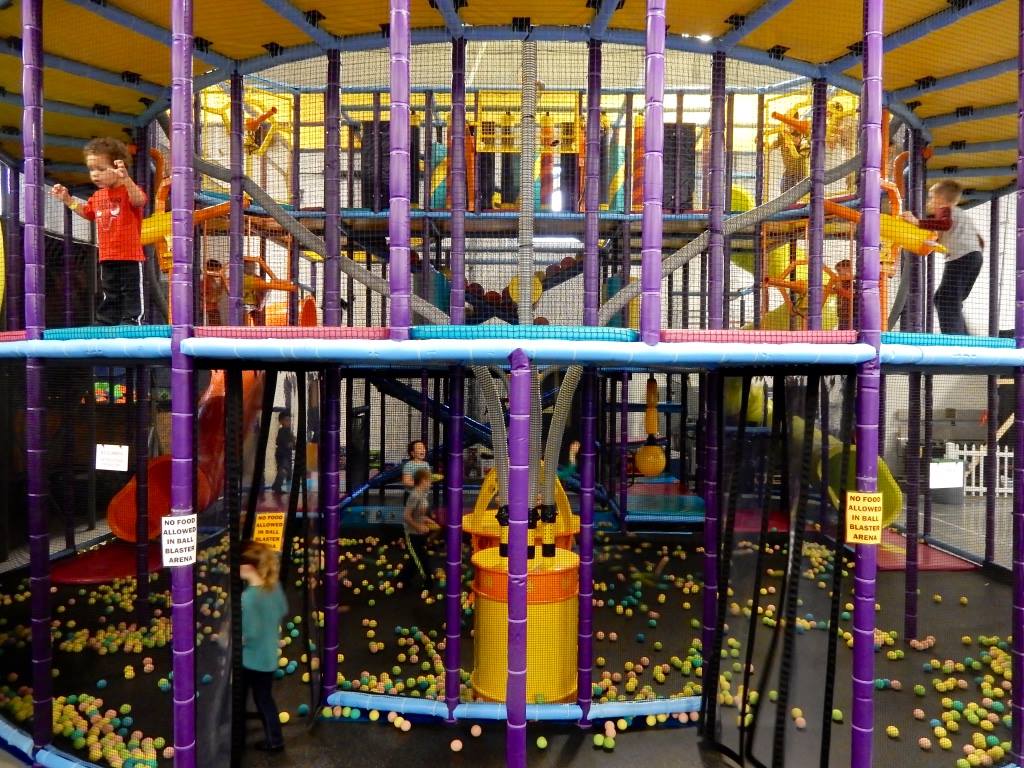 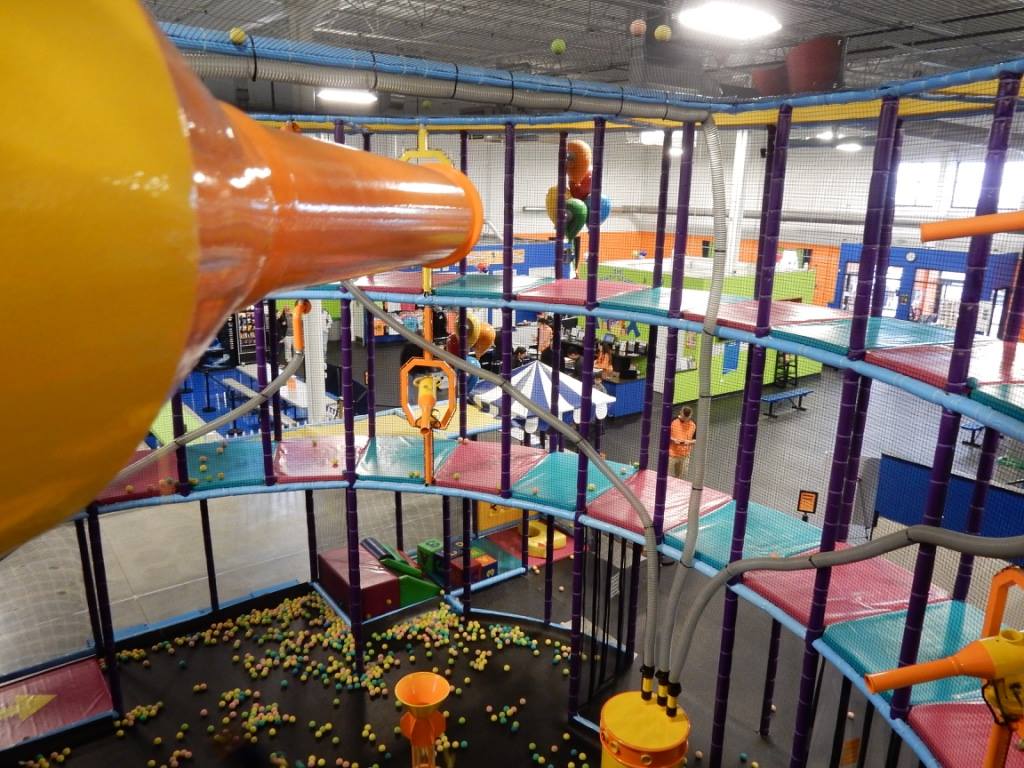 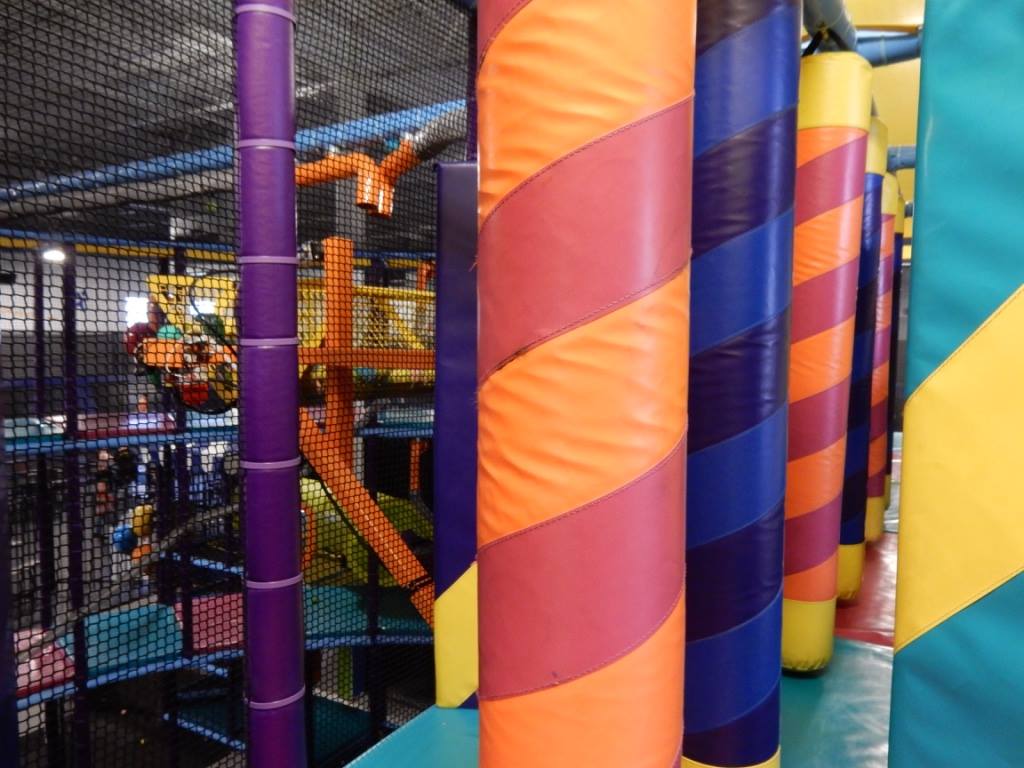 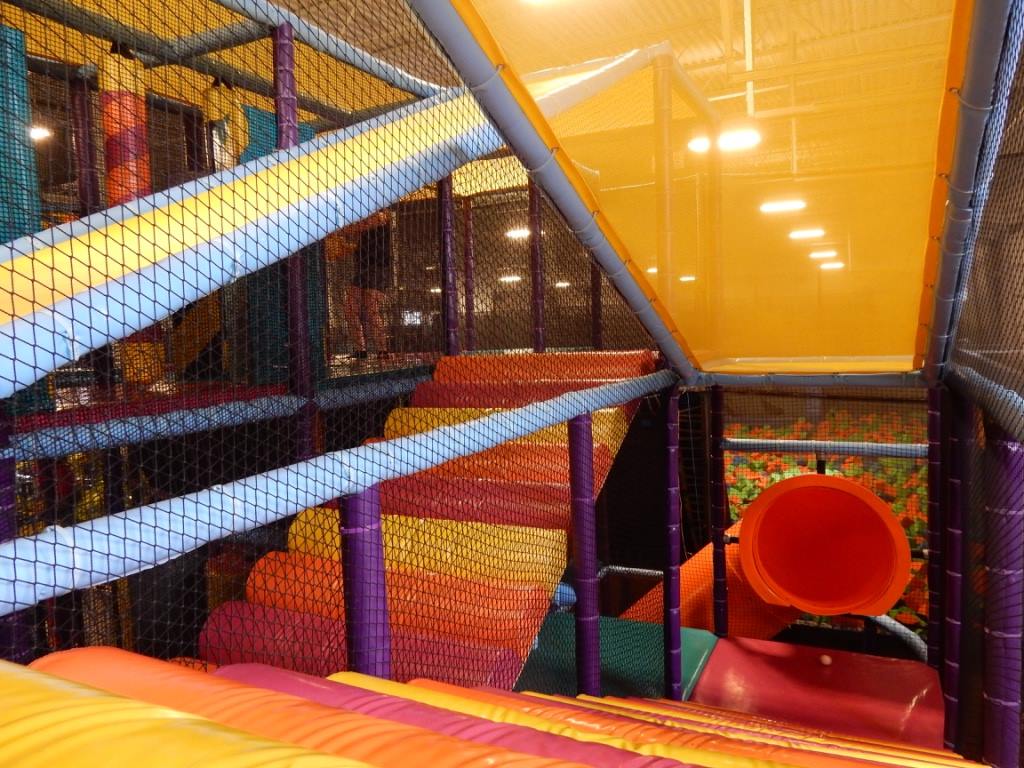 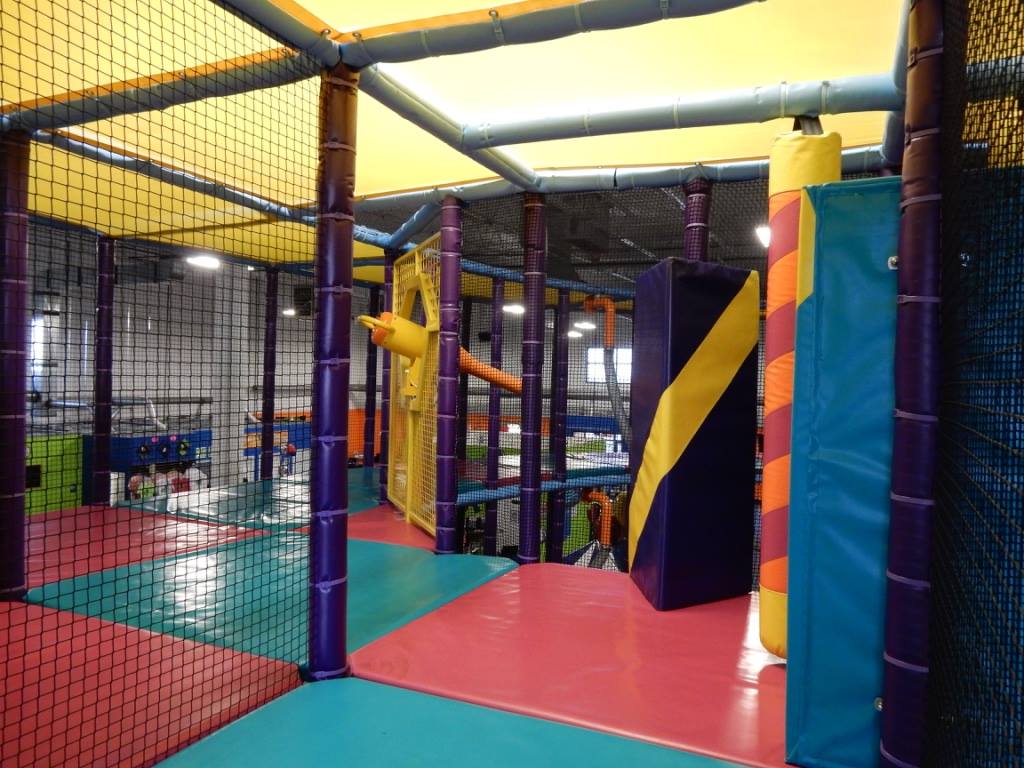 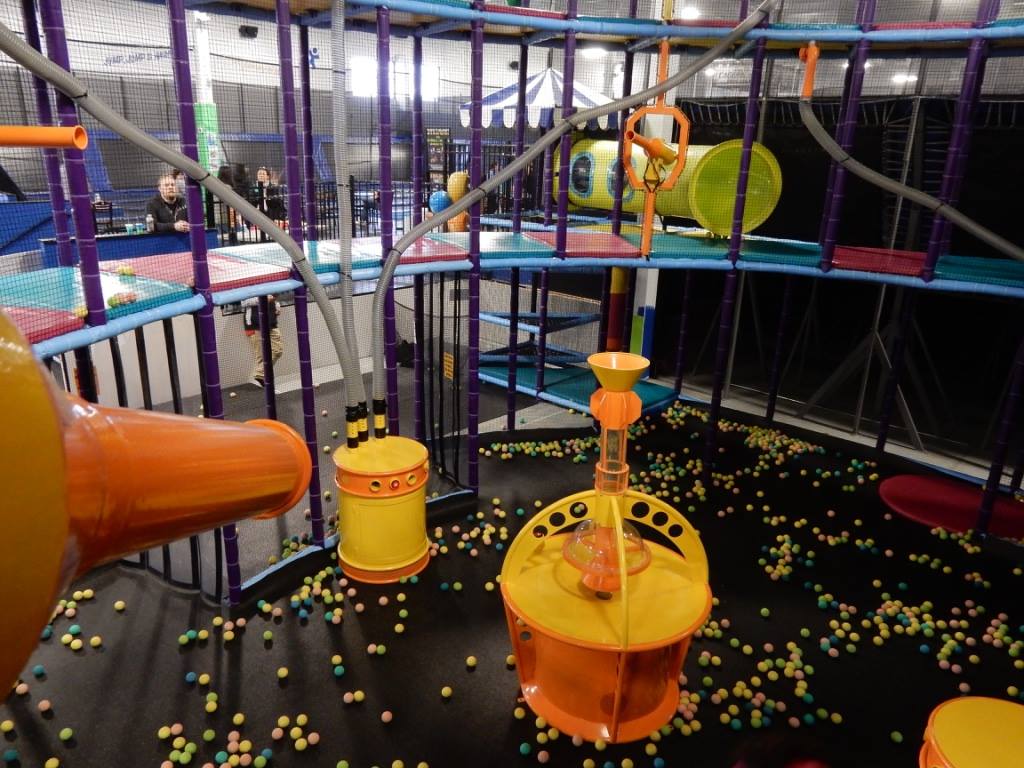 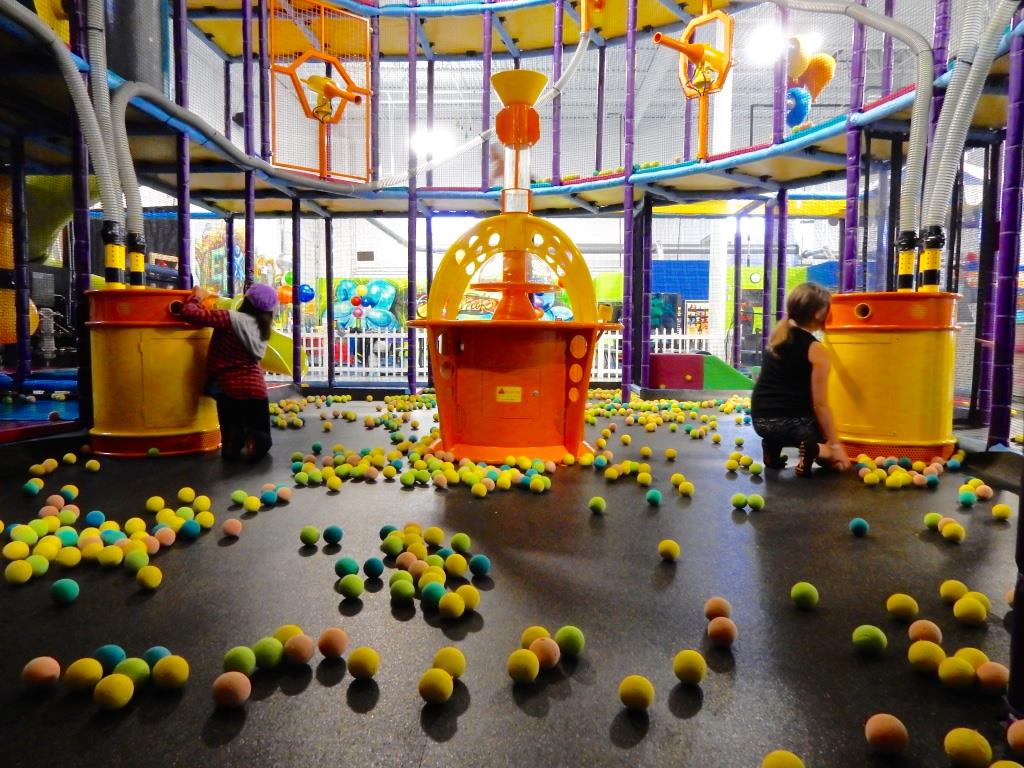 Outside of our ball blaster arena near Naperville in South Elgin is the rest of EPIC Air’s 30,000 square foot trampoline park where kids can have even more incredible fun. If for any reason you have any questions or comments about our ball blaster arena near Naperville, feel free to fill out the form on our contact us page and a representative will respond shortly or give us a call at 847-608-0646.

We had a BLAST last night at our daughter's 9th birthday party! Our host, Taylor was so cute and so much fun! She totally ran the whole thing smoothly. I can tell she enjoys her job and playing with the kiddos, which is very important at place like this. We've done parties for our daughter at other Jumping places before, and the host barely spoke to anyone, which can be a drag. Taylor really did everything for us. All we had to do was talk with the other parents and enjoy the party! She even jumped with the kiddos! We'll probably do her 10th birthday party there too, and we'll be back this winter to jump some more!

We have been to epic air several times and have had couple birthday parties as well in the past and every time has been wonderful! From the moment we got there the host Julio was incredible! He greeted us with such an amazing attitude and made sure that not only my daughter but all her little friends had a wonderful time!
In our mail today we got a thank you note from Julio the host, what a sweet gesture and very well appreciated!

" Our Party Host Savannah was great with all of the kids in our party! She was polite, helpful, and well organized. She made my job so much easier, which gave me the opportunity to take photos and enjoy the experience vs. worrying about having to tend to everyone. Thank you Savannah!"

I really love this place. As a nanny the age gap can always range in what to do with the kids. At Epic Air I find everything. My 2 year old boy loves the new ball shooting enclosure. Of course the older boys love the dodge ball, and the girls are out flipping all over the place. The concession stand has a lot to offer as well.

Great place to host a birthday! We had jumpers from preschool to 4th grade and everyone was able to have a great time!

LOVE Epic Air - have been there many times...the place gives kids a chance to have a ton of fun- and be very physically active! They definitely forget about being on electronics for a while! HIGHLY recommend it!!

A very cool place! But be ready for a good workout. Definitely recommended!

My teenage son and his friends really love to come here! Their Friday night deal is easier on my wallet and a great way for boys to get all their stress out from a long week at school. Playing dodge ball with your kids is a great way to take any frustrations out on them without actually hurting anyone! 🙂 We really, really love the foam pit, it's exhausting but exhilarating. Very fun place!  It is a fun way to keep them occupied and know where they are but they can feel independent without parents hanging all over them telling them to be careful.

*All Day Jump can be used for Epic Night Admission also.

All jumpers are required to wear Epic Grippie Socks which are available for $3.

All Jumpers and spectators are required to wear masks

ALL SALES ARE FINAL (Online and Instore)

CHECK US OUT ON  WGN NEWS 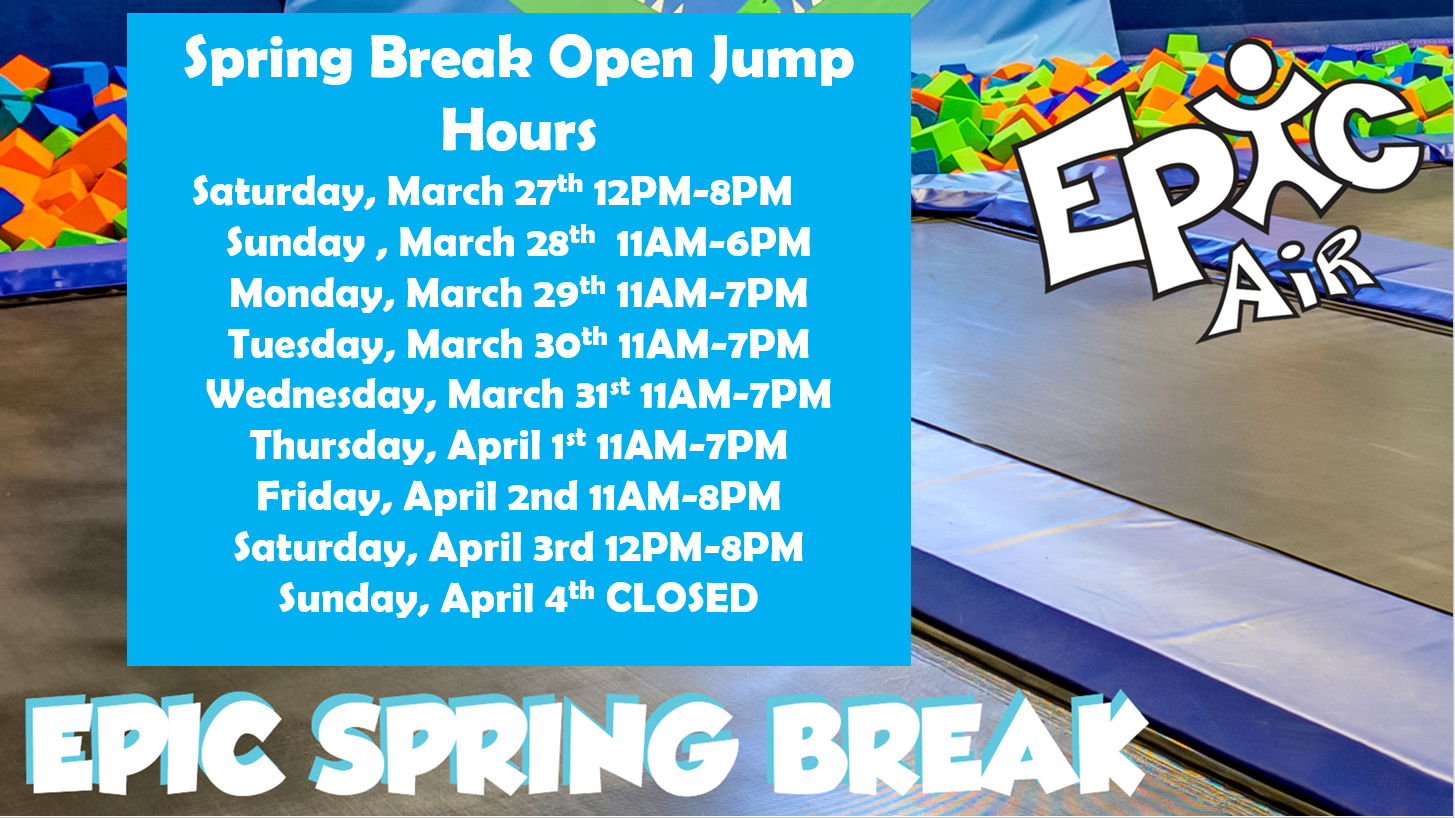 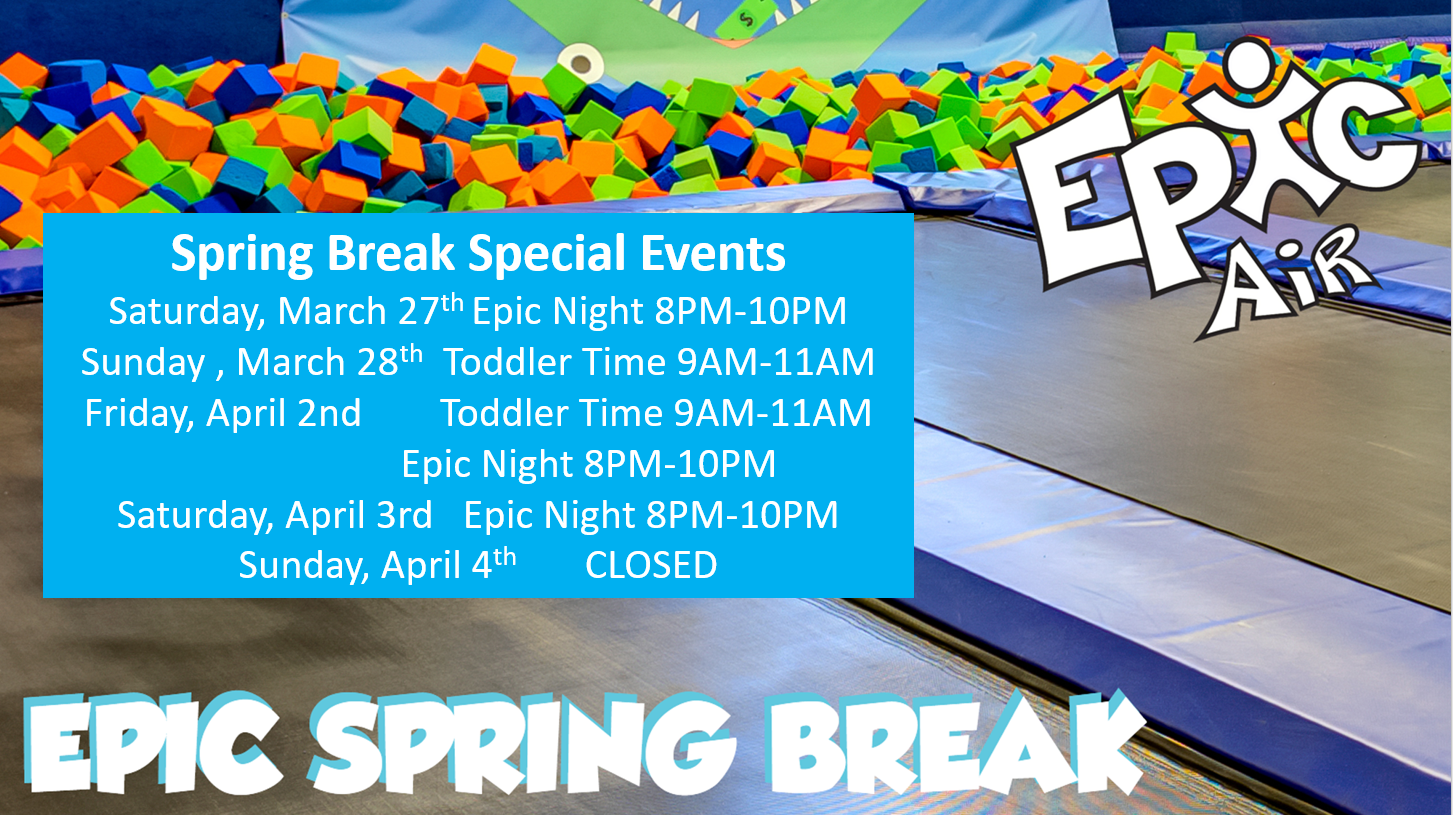 EXCLUSIVE OFFERS UP TO x2/MONTH

PRICES AND HOURS SUBJECT TO CHANGE AT ANY TIME WITHOUT NOTICE.

We are operating at a reduced capacity
and encourage guests to buy tickets online.
Walk-in tickets are still available

Masks are required for all customers

All guests are required to complete a new waiver.

*Open Jump ends at 8:00pm on Fridays
for Epic Night

Ages 6 & Under Only During Toddler Time

All jumpers are required to wear Epic Grip Socks which are available for $4.

ALL SALES ARE FINAL (Online and Instore)

CHECK US OUT ON  WGN NEWS 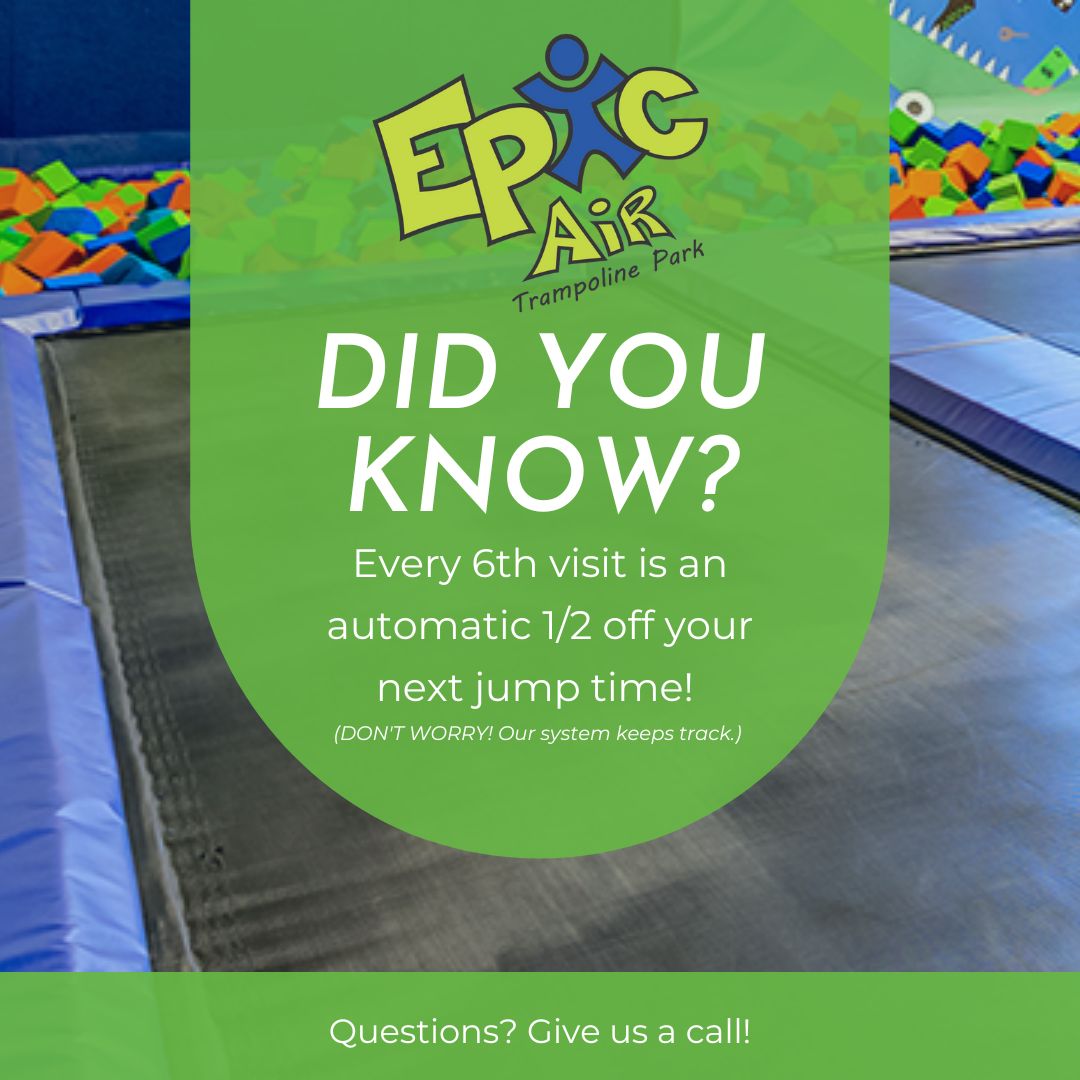 EXCLUSIVE OFFERS UP TO x2/MONTH

PRICES AND HOURS SUBJECT TO CHANGE AT ANY TIME WITHOUT NOTICE.

All guests are required to complete a new waiver as of October 1st 2020. Waivers are good for 5 years.

Ages 6 & Under Only During Toddler Time

Parents are allowed to assist by purchasing Epic Air Grip Socks and walking on the padding.

Sign up today and stay informed with Epic News, Events and Special Discounts!

Find us on social media and see what is going on at Epic Air Trampoline Park.